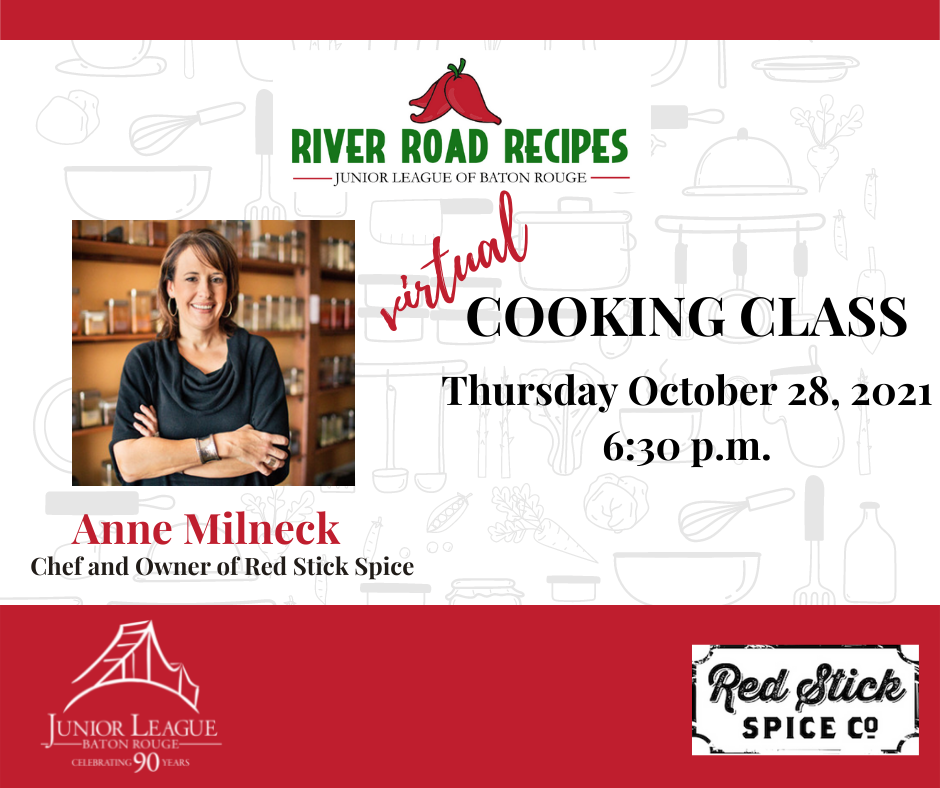 Join us for a virtual cooking class with Red Stick Spice chef and owner Anne Milneck on Thursday, October 28 at 6:30 p.m. She will guide participants in preparing a dinner for two, featuring four recipes inspired by beloved favorites from River Road Recipes. Chef Anne will be adding a few spicy twists to some classics plus shaking up a cocktail. Have your ingredients ready so that you can cook along with her!

There are two ticket options: 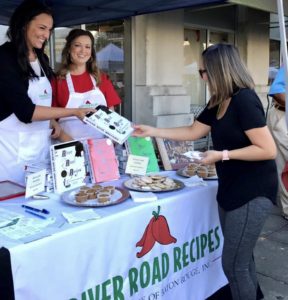 The Textbooks of Louisiana Cuisine

We created the original River Road Recipes cookbook. Share in the secrets of fine Creole and Cajun cooking with the Junior League of Baton Rouge’s award winning cookbook series, River Road Recipes. Since 1959, our award-winning cookbooks have captured the essence of Louisiana cooking and have delighted chefs and guests alike with their delicious recipes. With over 1.9 million books in print, River Road recipes speaks for itself. After all, it is the all-time #1 best selling community cookbook series in the nation. 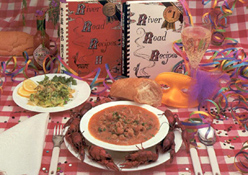 River Road Recipes I is The Textbook of Louisiana Cuisine with 650 recipes. It has sold over 1.3 million copies since 1959 and is considered by most to be the textbook of Creole cooking. In fact, The New York Times said, “If there were community cookbook awards, the Oscar for best performance would go hands down to RIVER ROAD RECIPES.”

River Road Recipes IV, Warm Welcomes, our newest addition, illustrates how we cook, eat and live in Baton Rouge. It features 48 menus, with over 300 innovative recipes, and color photographs to assist with all of your entertaining needs. A USA Book News “Best Books 2005” Award Finalist, Cookbook Category.

River Road Recipes I, II and III are all included in the Walter S. McIlhenny Community Cookbook Hall of Fame. The real winner, however, is the Baton Rouge community, which has benefited from more than $3 million derived from cookbook sales and donated by the Junior League of Baton Rouge to local charitable and educational projects.